What’s more perfect than horror movies around Halloween? I can’t think of many, that’s why this Halloween season we are putting together 3 lists of horror movies that you can stream today on Netflix to get you in a festive mood. You won’t find the Horror movies on this list that are marquee names for the season but instead movies that we think are worth a watch for one reason or another. Even films that don’t get the perfect scores still do things that are worth seeing and we want to shed some light on them. So without further ado, here is our first of four lists!

From Blumhouse and Directed by Mike Flanagan, Oculus (2013) is a horror film about a brother, sister and a supernatural mirror that they had in their house as children. I consider Oculus one of the better supernatural horror films released in a while. The way the story goes back and forth in time to tell the story is very well written explaining little by little throughout the movie and not giving too much away sooner than is needed. This movie centers around Kaylie’s (Karen Gillan) plan to destroy the mirror that she blames for a tragedy that destroyed her family when she was a child. One of the strengths this film has is its storytelling. The use of memories spliced with what is going on in the in real time explains what’s going on at a perfect pace but is also, at the same time,  disorienting. The tagline for this movie is “You see what it wants you to see” and nothing could be truer. The Mirror in this film is one of the better psychological killers I’ve seen in films in a while, and that says a lot for an inanimate object. This film wraps up nicely at the end and brings the story full-circle but also leaves you with questions for your interpretation, like, was this the mirror’s plan all along? 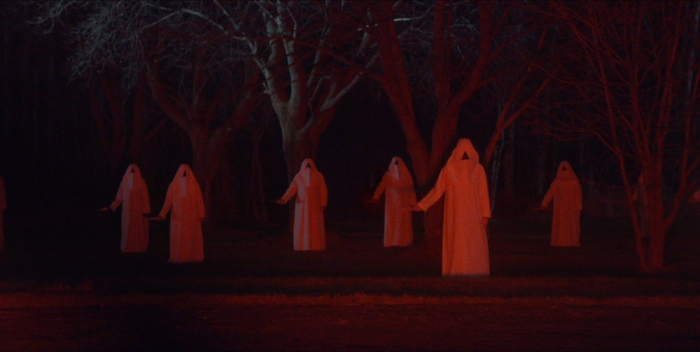 The Void is a Horror/Sci-Fi movie from 2016 that has a 90’s horror feel. The film starts with the lead, Sheriff Deputy Carter (Aaron Poole) takes an injured man to a local hospital during a graveyard shift and is met by hooded figures outside of the hospital where we meet the rest of the cast. This Movie has a lot going for it with the character design of the hooded figures that makes you feel like you are watching a John Carpenter-esque film. The entire movie is shrouded in mystery and keeps you guessing throughout. The Void features some of the best horror practical effects since the Thing, which is very refreshing. The sheer grossness that these effects create is worth a watch on their own. Even with the great tone and visuals that this film provides, it also has its fair share of misses. The dialogue between the characters in the film seems forced with no emotion, especially between Sheriff Deputy Carter and Allison Fraser (Kathleen Munroe). Their scenes together are very taxing and leaves a lot to be desired. Also, the third act seems like it was from a completely different movie but this is where you get all of the good practical effects. Even with its flaws, I would still suggest The Void for the successful use of practical effects and the feel of 90’s horror that it gives.

Last Shift comes in from 2015 and was directed by Anthony DiBlasi. It’s a psychological horror movie that is contained to just a police station. Our lead, Jessica Loren, is starting her first shift at this police station by merely watching over it until a hazmat team comes in the middle of the night to transport evidence that cannot be handled by regular schmoes. The catch is, a famous cult leader and two of his worshipers had committed suicide in one of the cells years back when her father was on the force and her supposedly boring night doesn’t go as planned. This is just one of those fun B movies that are contained and has plenty of decent scares and fun twists. The makeup effects in this movie are pretty decent as well. I say if you’re a fan of horror and have an hour and a half to kill, this is the perfect movie for you.

Is that really Ethan Embry? The same guy from Can’t Hardly Wait!? Well yes, it is. This is the first thought that went into my head while watching The Devil’s Candy. This is a 2015 horror film written and directed by Sean Byrne. This starts off as a family that needs a new start moves into a home that seems great at first and then turns sour, but diverts from the horror trope rather quickly and turns into a satisfying under the radar horror film. I can’t say much about this film without giving away spoilers, but the Hellmans (awesome last name) find that the previous resident of their house isn’t the best guy in the world. Jesse Hellman is a struggling painter who moves into this house with his wife, Astrid, and daughter, Zooey. One of the most fun parts of this movie is that Jesse and Zooey love metal. So if you’re a metal fan, you get to hear some of the classics while enjoying a good B horror flick. To wrap this up again without spoilers, The Devil’s Candy is a great horror movie begging to be watched on Netflix that sucks you in with a familiar premise but then takes you on a great ride with fun twists and haunting resolution.

View all posts by cinemashyft